I felt frustrated. I was busy all the time, and exhausted at the end of the day, but my task list kept growing. Even worse, I wasn’t making progress on important goals, and my preaching preparation lacked depth. I ‘d sometimes take drastic action to address the insanity of my schedule, but I’d eventually end up over-committed again. 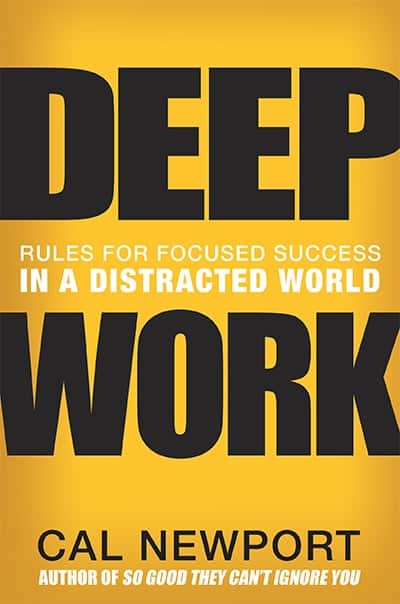 Cal Newport understands. In his new book Deep Work: Rules for Focused Work in a Distracted World, Newport identifies the type of work I was doing as shallow work. Shallow work is “noncognitively demanding, logistical-style tasks, often performed while distracted. These efforts tend to not create much new value in the world and are easy to replicate.” This kind of work dominated my life.

Newport believes that deep work is becoming increasingly valuable, even as it’s becoming increasingly rare. He defines deep work as “professional activities performed in a state of distraction-free concentration that push your cognitive capabilities to their limit. These efforts create new value, improve your skill, and are hard to replicate.” He’s written this new book to help us understand the value of deep work, and to help us learn how we can shift more of our time from shallow work to work that truly matters.

Newport doesn’t argue that deep work is inherently more moral. Instead, he argues that we should pursue deep work because it’s valuable, rare, and meaningful. The deep life, he argues, is the best life. He then offers four simple rules for pursuing deep work: work deeply, embrace boredom, quit social media (with caveats), and drain the shallows. Deep work isn’t a habit, like flossing our teeth, that we can just begin. Instead, it’s a muscle that needs to be developed. Newport helps us understand how to do this, and illustrates the principles with stories from himself and others.

Newport doesn’t suggest that we eliminate all shallow work. Some shallow work is necessary. It’s what keeps us from getting fired, he explained, while deep work is what will get us promoted. He does want us to consider how much time we’re spending in both categories, though, and to be intentional about the split.

Although Newport argues for deep work from a pragmatic stance, I would argue that there is a moral dimension to deep work. If the Christian life is stewarding everything that God has given us for God’s glory and the benefit of others, then learning to do deep work may be a matter of stewardship and obedience.

Deep Work is a book I’d recommend to anyone, including pastors. I’m finding it helpful as I work on strengthening my ability to do deep work.