“Many people have asked me if I have ever looked at pornography,” writes William Struthers in his book Wired for Intimacy. “When I tell them that I find many things on television or on newsstands pornographic, they frown…Yes, I have viewed pornography because it is everywhere. You cannot get away from it; if you don’t view it intentionally, you will unintentionally.”

Here are ten thoughts on living in a world of sexual temptation as guys:

Two: Society is conflicted about this. One recent article on the leaked Jennifer Lawrence nude photos illustrates this. To the extent that we buy into culture’s views on sex, we will be conflicted and confused as well.

Four: Sexual temptation is powerful, but it often goes deeper than we realize. It’s not just about the sex. It’s usually a sign that something else is off. The acronym HALT is helpful: temptation can be acute when we’re hungry, angry, lonely, or tired. “In the middle of trouble, when you are in the heat of the battle, you will run somewhere for refuge. You will run somewhere for rest, comfort, peace, encouragement, wisdom, healing, and strength…” (Paul David Tripp, Dangerous Calling). Many men run to sex for refuge.

Five: Pastors aren’t exempt. As Tripp wrote in Dangerous Calling, pastors are nothing more than people in the midst of their own sanctification.

Six: Most men struggle alone. Men feel a deep sense of shame about their struggle with this temptation, and therefore keep it private. The problem: we cannot find a private solution to this private problem.

Seven: Secrecy and shame are one of Satan’s greatest tools to keep us in bondage to sexual sin. Sin is like mushrooms: it grows in the dark.

Eight: When men reach out for help, they often reach out too late — after the temptation, and not in the middle of it.

Nine: Shame is lifted when we encounter God’s grace. “The gospel declares that there is nothing that could ever be uncovered about you and me that hasn’t already been covered” (Tripp). 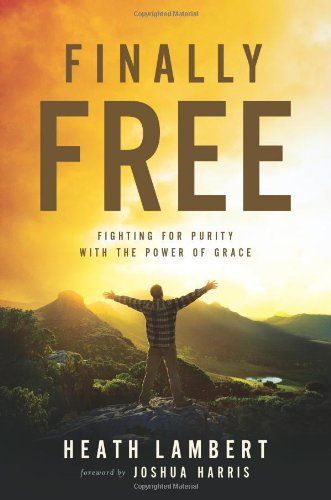 Ten: The key to this struggle is not willpower, but a radical encounter with God’s grace in community. There are many practical steps to take, but they begin with ceasing to struggle in secrecy and in your own power. “The tide will begin to turn in your struggle against pornography when you begin to grasp forgiving grace and transforming grace, as you learn to repent,” writes Heath Lambert in Finally Free: Fighting for Purity with the Power of Grace. He writes:

There are many good books on this subject. Finally Free and Samson and the Pirate Monks are ones I highly recommend. I also hear good things about Wired for Intimacy.

I’d love to hear your thoughts on this important topic.