What’s the first priority of leadership? Character. It matters more than leadership techniques, skills, or even results. The results that matter, after all, flow from character.

I’ve been thinking about this recently in light of three different books: The Deep Change Field Guide by Robert Quinn, Let Your Life Speak by Parker Palmer,  and Redefining Leadership by Joe Stowell.

To my surprise, Palmer has a lot to say about leadership in Let Your Life Speak. Because pastors are (among other things) leaders, and “a leader is someone with the power to project either shadow or light onto some part of the world and onto the lives of the people who dwell there,” character is crucial. Palmer writes:

A leader shapes the ethos in which others must live, an ethos as light-filled as heaven or as shadowy as hell. A good leader is intensely aware of the interplay of inner shadow and light, lest the act of leadership do more harm than good.

Leaders, he writes, have a tendency to “project more shadow than light.” Positive thinking doesn’t change this, and it also ignores some dangers:

By failing to look at our shadows, we feed a dangerous delusion that leaders too often indulge: that our efforts are always well-intended, our power is always benign, and the problem is always in those difficult people whom we are trying to lead!…If we do not understand that the enemy is within, we will find a thousand ways of making someone “out there” into the enemy, becoming leaders who oppress rather than liberate others.

Parker outlines five issues that we tend to face, including insecurity about identity and worth, a tendency to view everything as a battle, functional atheism (“It all depends on me”), fear of chaos, and denial of death. I think I’ve seen all five in leaders, including myself.

What is a good leader? Parker writes:

Good leadership comes from people who have penetrated their own inner darkness and arrived at the place where we are at one with one another, people who can lead the rest of us into a place of “hidden wholeness” because they have been there and know the way. 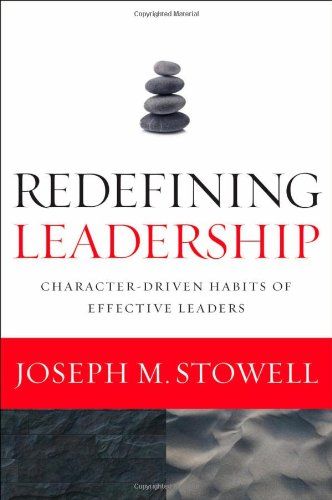 It’s no accident that Scripture puts such high value on the character of a leader. It’s the difference between what Joe Stowell calls “character-driven leadership” and “outcome-driven leadership.” We need more focus on character. Character, Stowell writes, is the defining priority of leadership. His book, along with Let Your Life Speak and The Deep Change Field Guide, are striking similar notes.

We will inevitably project who we are. All the leadership techniques in the world will not change this. Apart from a character that is shaped by the gospel, we will project shadows. The first priority of a leader must be character: to be remade by the gospel, to experience the deepest change, to be the chief repenter, the most enamored with the gospel, and the most real about life.

Character is the first priority of leadership.