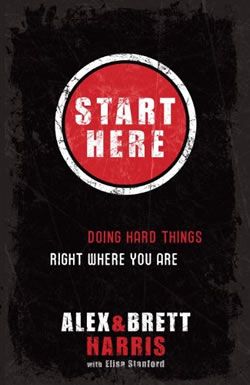 Many teenagers read Do Hard Things (written by Alex and Brett Harris in 2008). Though many people, especially teenagers, were inspired, a lot of people had a lot of questions. Alex and Brett also heard from many teenagers telling their stories about doing both big hard things and small hard things and the way God has used that to help them grow. The main target is Christian teenagers and Christian people who work with Christian youth, though I think there are Christians of all different ages who would benefit from reading this book. Anybody who is about to do a hard thing (no matter how small) for God’s glory, any Christian who does not want to spend so much time on Facebook doing quizzes like “Which color are you?” and taking care of FarmVille animals, and any Christian wanting to grow closer to God could benefit from this book.

This book was written by sophomores in college who have worked in the Alabama Supreme Court as teenagers. Alex and Brett could have focused on their accomplishments, but instead they focused on other peoples stories and the way God has worked through other people. If they had talked about everything they had done and not mentioned God I would have said, “Oh well some people are just smart and can do hard things”. When they gave God credit they are saying God can work through anyone of us when we listen to what God is calling us to do.

The very first chapter is a bit of a summery of Do Hard Things as well as an overview of the rest of the book.

The book had a chapter that gives advice on how to get started on doing hard things, before you really know what you want to do. The questions I have asked often in this chapter are “I’m ready to get started – on something! What should I do now?” and “Do small hard things count?” Though more questions are asked in the chapter, these two questions give you an idea of the questions asked. Alex and Brett respond to these questions in a biblical way, giving real life examples and experiences of other teenagers. At the end of the chapter I had a couple of ideas of hard things I want to do myself.

The next chapter guides you through the next part of the process: when you have an idea of what you want to do. This section gives practical advice to help you carry it out. This chapter features questions like: “How do I ask people to support my cause?” and “I’m not big on bake sales. How can I raise money for my project?” As a teenager I feel like the more practical advice I can get the better, because I haven’t lived that long and there’s a lot I could learn.

The next chapter talks about “the side effects that might occur when you do hard things”. The chapter covers ways to handle the affirmation people get for doing hard things, how to handle an interview, and how to manage your time when doing hard things. Though I personally have never been interviewed and that part of the chapter did not relate to my life, I really appreciated the section on dealing with the affirmation teenagers get for doing the smallest things (some of which I barely consider hard) – and of course that just intensifies when teenagers do big hard things. Some adults say to me “Wow, You’re a teenager that actually dusts in your house? You’re not like other teenagers out there.” like it’s a big accomplishment. It can be hard to deal with the affirmation I get for the smallest things, some of which aren’t even hard. Anytime when I’ve done something that actually is hard, some adults act like I must be lying about about age or something, saying “That’s simply impossible for a teenager!” (and I don’t even think I’ve done anything too hard compared to some teenagers).

The next chapter is my favorite and can be real struggle for me at times: keeping God the focus and center every step of the way. The chapter talks about keeping the motivations of our hard things pure, and what to do when doing hard things distract us from our time with God. God is found throughout the book, but in this chapter there is nothing except God emphasized which I thought was really important.

Doing hard things is hard, so the next chapter is dedicated to the overwhelmed feelings that come with doing hard things and the feelings people have when they do hard things and it doesn’t work out. Whenever I get ideas of big hard things I can do people are quick to discourage me and say “This might not work out the way you want it too.” I think it’s important to know that hard things don’t always work out. I think it can also for whatever reason be difficult to remember that hard things are actually just that: hard. At the same time this chapter gives me a courage to deal with the comments I get when I tell people about wanting to do something that’s hard. Recently I’ve been saying, “Yes I know it might fail, but it’s in God’s hands. He might say no, he might say later, he might say not in this way. I’ve prayed about it and I feel God is saying yes, but I’m not going to be the one to close these doors. If anyone will it’ll be God.”.

Alex and Brett Harris get criticized for making “teenagers grow up too quickly” often and the next chapter asks about that. Questions in this chapter include “Can doing hard things be fun?” to “Am I missing out on anything because I’m not doing the normal things teens do?” This chapter is a very good motivation for doing hard things.

You may think that after you do hard things you’re done, but the Alex and Brett beg to differ. The next chapter is “when doing is done.” In this chapter the book talks about pride, feelings of accomplishment, taking breaks after doing hard things, and not falling back into old ways once you’ve done one hard thing. I know that after I do something hard, it can be just as hard to not fall back into old ways, so this chapter was meaningful to me.

To inspire you more the book takes time to talk about Ana, who organized a pro-life fundraiser in the small town of Ithica, a town that is generally not pro-life, and faced many obstacles including being told by the charity she had already partnered with that she was too young, Ithica wouldn’t be a good fundraising place, and that the fundraiser was going to fail (after she had been working on the project for months). The chapter also talks about John, who won the San Antonio Independent Christian Film Festival (SAICFF) as a teenager. John’s story is filled with many obstacles, time consuming projects that are not recognized, money spent, and so much more. In the end John was happy that he pushed himself to do hard things and it was simply inspiring.

The last chapter is about the power of groups. Christians are part of the body of Christ and in order to do some hard things we need to come together. This chapter is short, but makes a powerful statement.

The book features an appendix of 100 hard things teenagers have done (some are big and some are small everyday things), as well as discussion questions.

Do Hard Things inspired me to do hard things, but I didn’t have too many ideas in how to carry it out. When I read Start Here I got ideas for projects both big and small (some of which I plan to carry out). Alex and Brett have inspiring stories to tell, but reading their material the thing that inspired me most is the power of God. Now before I finish I want to say that this book can’t change you and if you set off reading this book thinking about doing hard things and you ignore God’s place in it, it won’t last (and even if it does last it will be meaningless). Keeping God at the center can be a hard thing in itself, but the purpose of doing hard things is to bring glory to God. If you read this book thinking about God and his glory and will, this book may be the second most life changing book you have ever read (next to the Bible).