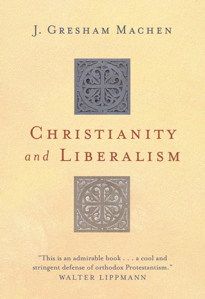 I’ve been told that Christianity and Liberalism is one of the top hundred books of the last century, and that it “deserves a place on every thinking Christian’s shelf” (Trevin Wax). I believe it.

It’s a book that’s still very timely today. If you don’t have it, get it. If you have it, read it.

What is it that forms the content of that primitive teaching? Is it a general principle of the fatherliness of God or the brotherliness of man? Is it a vague admiration for the character of Jesus such as that which prevails in the modern Church? Nothing could be further from the fact. “Christ died for our sins, ” said the primitive disciples, “according to the Scriptures; he was buried; he has been raised on the third day according to the Scriptures.” From the beginning, the Christian gospel, as indeed the name “gospel” or “good news” implies, consisted in an account of something that happened. And from the beginning, the meaning of the happening was set forth; and when the meaning of the happening was set forth there was Christian doctrine. “Christ died” – that is history; “Christ died for our sins” – that is doctrine. Without these two elements, joined in an absolutely indissoluble union, there is no Christianity.

It is perfectly clear, then, that the first Christian missionaries did not simply come forward with an exhortation; they did not simply say: “Jesus of Nazareth lived a wonderful life of filial piety, and we call upon you our hearers to yield yourselves, as we have done, to the spell of that life.”…It was a historical message, an account of something that had recently happened, it was the message, “He is risen.”

…The same message, with its implications, has been the very heart and soul of the Christian movement throughout the centuries. Yet we are now asked to believe that the thing that has given Christianity its power all through the centuries was a blunder, that the originators of the movement misunderstood radically the meaning of their Master’s life and work, and that it has been left to us moderns to get the first inkling of that initial mistake. Even if this view of the case were correct…it would be doubtful whether such a religion could rightfully be called Christianity.