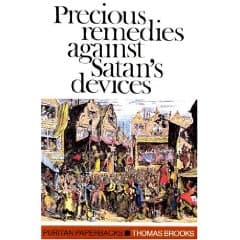 Beloved in our dearest Lord,

Christ, the Scripture, your own hearts, and Satan’s devices, are the four prime things that should be first and most studied and searched. If any cast off the study of these, they cannot be safe here, nor happy hereafter…

He has several devices to destroy the great and honorable, the wise and learned, the blind and ignorant, the rich and the poor, the real and the nominal Christians.

I often marvel. Satan’s playbook is very limited. I’d guess it’s five pages or less. He keeps pulling out the same tired strategies, and surprisingly, they often seem to work. He’s anything but original.

I had a friend once who commented that the thing to remember about Satan is that he always overplays his hand. That’s always stuck with me. He’s not subtle in his approach, and he always goes just a little too far.