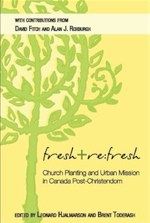 The beginning of my chapter in fresh & re:fresh:

I lay awake the night I realized I would be going to Richview Baptist Church, a Fellowship Baptist church in northwest Toronto. I don’t know how I knew but I did. It was enough to keep me awake for hours praying that it wouldn’t happen.

It was still weeks until I spoke for the first time at Richview. It was months until I made it into the pile of candidates. It was even more months until my name made it to the top of the pile, and then an even longer time until I began as pastor. But for some reason, I sensed that night that I would be going to Richview, and I wasn’t happy.

Richview Baptist Church was founded in 1959 in what was then a remote part of Toronto. Over the years it had grown to become the largest church in our denomination in west Toronto, with an average attendance of over 400 people. It was a flagship…

I’m not usually prone to revelations or mystical experiences, but somehow that evening I had a sense that I would be part of the next chapter of this church’s history. I wasn’t at all confident in my own abilities, or sure that I wanted to pay the price for the transition that would take place.

This was an interesting chapter to write. I’m looking forward to getting my hands on a copy of the book and digesting some of the other contributions. You can find out more about the book at the fresh & re:fresh website.