George Whitefield (1714-1770) didn’t start out as much of a preacher. After his first sermon, someone complained to the bishop that Whitefield’s sermon had driven 15 people mad.

In the years that followed, Whitefield preached 18,000 sermons to crowds of up to 30,000 people throughout Great Britain and the 13 American colonies. He crossed the Atlantic 13 times and travelled extensively when  any type of long-distance travel was impossibly difficult. It’s hard now to imagine how much of an impact Whitefield had in his day. Dr. Martyn Lloyd-Jones called Whitefield “the greatest preacher that England has ever produced.”

Whitefield died in 1769 in Newburyport, Massachusetts, just northeast of Boston. He is buried there at Old South Presbyterian, a church he helped to found. I had tried to set up a time to tour the building, but we couldn’t seem to make it work.

I showed up in any case to take a look around.

I thought I’d only get to look around outside, but decided to check the School Street entrance to the church just in case. Turns out someone was there. She called her husband Richard, and within half an hour we were getting a private tour of the church, including the crypt underneath the pulpit where Whitefield was buried. 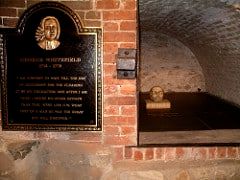 More pictures here, including one of the house in which he died. It hasn’t changed too much from this old drawing I found online.

The tour was fascinating. If you like church history and ever get the chance to visit Newburyport, you should try to take the tour as well. Can’t wait to finish volume 2 of Dallimore’s biography of Whitefield.