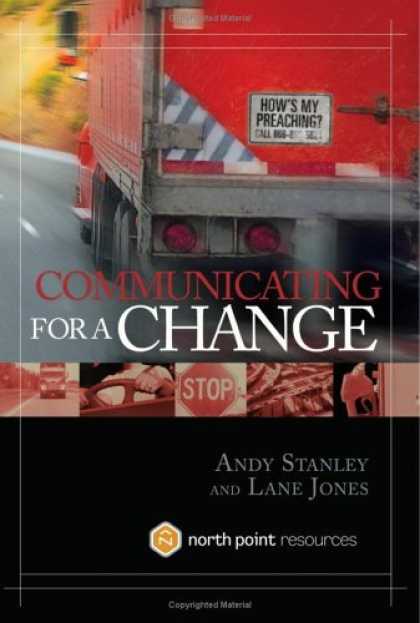 Anyone who has heard Andy Stanley preach knows that he is an effective communicator. Now, Stanley and coauthor Lane Jones let us in on the secrets of effective preaching in Communicating for Change.

The first half of the book is a fable about a discouraged preacher, Pastor Ray Martin, who is desperate for help. He meets with an acquaintance, a successful businessman, who flies him by helicopter to meet Will Graham, a truck driver who has just the answers that Ray needs. By the time Ray leaves, he has a new approach and new hope for his preaching.

The second half of the book explains this model of preaching, covering topics like the goal of preaching, how to outline the message relationally, and how to engage the audience.

The model offered by Stanley and Lane has two main strengths. First, it centers preaching around one central idea, taken from the text. This is more effective than other approaches, which fail to capture the central idea of the text. In trying to communicate everything, they communicate nothing. Haddon Robinson and others have also written on the importance of the big idea in preaching.

Second, Stanley and Lane also present a relational outline approach to preaching. Their outlines are built around “the communicator’s relationship with the audience rather than content.” They remind us that “the way we organize material on paper is very different from how we process information in a conversation.” This relational approach can lead to better communication of the Biblical idea of a passage.

The book is not without its problems. The leadership fable, in which an unlikely hero rescues a hapless practitioner, may be an overused approach. Also, this book is not a homiletics text, and preachers would be wise to look beyond this book for a full understanding of the task of preaching.

Stanley and Lane argue that the purpose of preaching is to “teach people how to live a life that reflects the values, principles, and truths of the Bible.” They imply, however that this can happen by giving people application points. I am not so sure that application points always lead to life change; they can instead lead to application fatigue and moralism if the preacher is not careful. Preachers will want to wrestle with the larger issue of how people grow into spiritual maturity.

Communicating for Change reminds us of the importance of engaging interest, communicating a single big idea, and honoring relational dynamics in our preaching. It may be what discouraged preachers need as they work to improve their preaching.