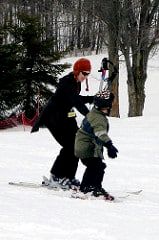 Christina went skiing with her school for a week in January. Ever since then, she’s been begging us to hit the slopes together. We finally did yesterday at the Mansfield Ski Club just north of Toronto thanks to our friends the Campbells. I’m 39, which some people might say is a little late to start skiing. Christina did amazing and had no troubles with any of the runs. Charlene hasn’t skied in about 20 years but did just fine. As for Josiah, he moved from the bunny slopes to blue square (intermediate) in no time. That kid can travel. As for me, I had a bit of trouble at the top of the blue square slope but I think that was more psychological than anything. Once I got going I was fine. We all had way more fun than you’re supposed to on your first family ski trip, and I think it’s safe to say we’ll be going back to the slopes next year. Maybe winter’s not all bad after all.