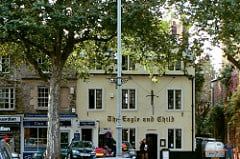 In 2002 I took this picture of The Eagle and Child in Oxford. This pub was the haunt of the Inklings, a writers’ group that included J.R.R. Tolkien and C.S. Lewis. They met there every Monday or Friday before lunch to drink and talk. I was alone and too chicken to go in by myself, but it’s cool to think of the meetings that took place within these walls.

The introduction to the White Horse Inn program describes a time five centuries ago when the masses met in taverns and public houses to discuss and debate ideas. From one such inn, the White Horse Inn in Cambridge, the Reformation came to the English speaking world.

I belong to various groups and attend meetings. I don’t expect to ever replicate what happened above, but I don’t think we’re trying hard enough. Although I have a few friends who fit the bill, and I’ve experienced a little about what I’m about to describe, it’s only enough to tease me and make me want more.

Here’s what I’d love to find: a group of people who get together and:

As I say, I have hints of some of these, but I want more. I still haven’t found what I’m looking for.