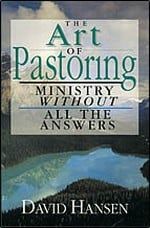 There are some books that deserve to be read many times over. For the past twelve years or so, I’ve had such a book sitting on my shelf. It’s called The Art of Pastoring: Ministry WIthout All the Answers by David Hansen.

I remember being profoundly grateful for the book when I first read it. Ever since, though, it’s been sitting on my shelf, mostly unread but occasionally remembered.

Today I picked up the book again. I’m regretting that I haven’t come back to it sooner. Eugene Peterson says, “This is the freshest and most honest book on pastoral work you’re ever likely to come upon.” The back cover says, “Pastoral ministry is a life, not a technology.”

My predecessor’s library haunted me. When he left his church, he left the ministry and forsook his library. Every single book remained in the office on the shelves, undisturbed; he took not one…

His library told the story of his ministry. The books were ordered in topical fashion…his topics represented most of the trends of Christianity in the 1970s, the decade of his pastoral ministry….

The church growth movement was well represented. He went to some conferences on the subject and bought books. Church minutes from his tenure reveal that church members attended the conferences with him. They also reveal that he tried the methods but with no results. Closets, desk drawers and file cabinets were filled with dittos of church growth teaching materials, church surveys and proposals.

He journeyed as a charismatic….He had learned from books how to organize growth groups and spiritual retreats…From late in his ministry there was a smattering of literature from Reformed theology, psychology, liberal theology and biblical studies.

A few parishioners told me with deep sadness that by the end of his ministry he had lost much of his Christian faith. His faith crisis did his ministry in. The books couldn’t deliver him…

Most of the books and articles were written by genuine Christians. What went wrong?

I didn’t know what went wrong. His library presented a bleak testimony to me, though. He and I were cut from the same piece of cloth. I believed that following Christian movements amounted to following Christ. I was suckled on trend-driven Christianity. I’d grown up in the thick of consumer religion. It was all I knew. I knew every movement represented in his library. I’d tried them all myself. I didn’t know if I could do pastoral ministry without them. But every time I looked up at his library, I knew that I had to try.

I am reading this book again, but I think I’ll have to go back and think through some sections more carefully. For pastors who don’t need another how-to book, this is one of the most profound and helpful books out there. I highly recommend it.