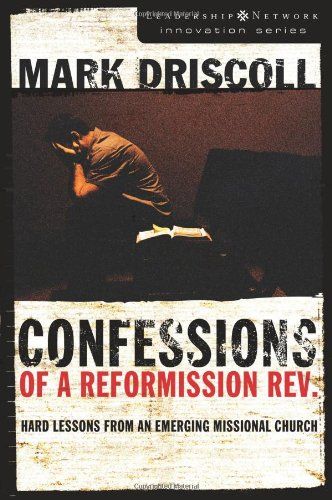 Mark Driscoll is a pastor who finds himself at the center of controversy in Christian and non-Christian circles. His most recent book Confessions is “the story of the birth and growth of Seattle’s innovative Mars Hill Church, one of America’s toughest mission fields. It is also the story of the growth of a pastor, the mistakes he’s made along the way, and God’s grace and work in spite of these mistakes.”

Driscoll doesn’t fit in any category neatly. Tim Challies writes, “I am not the only one confused by Driscoll who is varyingly described as emerging, missional, Reformed, sarcastic and vulgar (all of which are true of him).” At times it looks like Driscoll goes out of his way to offend everyone. On the other hand, Driscoll is refreshingly candid and bold. I love it, but it seems to be too much for some.

The story of many “successful” churches have been tidied before going to print. Not here. Driscoll says, “I have made so many mistakes as a pastor that I should be pumping gas for a living instead of preaching the gospel.” He begins with “Ten Curious Questions” designed to help clarify the church’s identity, gospel, mission, size, and priorities. For instance, he asks which gospel we will proclaim: “a gospel of forgiveness, fulfillment, or freedom?” “Do you have the guts to shoot your dogs?” (He advises: “Dogs are idiotic ideas, stinky styles, stupid systems, failed facilities, terrible technologies, loser leaders, and pathetic people…Be sure to make it count and shoot them only once so that they don’t come back and bite you.” Now you know why he’s controversial.)

For the rest of the book, Driscoll tells the story of Mars Hill from its start to the present and even his hopes for the future.

This book isn’t for everyone. I enjoyed it, and saw it as a friendly and encouraging kick in the pants. If the above quotes appeal to you, then Confessions is a book that will help you in your ministry.