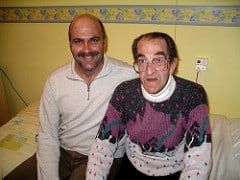 Five years ago we found Dad collapsed in his apartment and began worry about his ability to live alone. Since then, we’ve been back numerous times checking in on him and trying to get him help as he gets older and more frail.

Later, we found eviction notices, unpaid bills, and food gone bad and realized that he really wasn’t coping. We did our best to get help but it’s not that easy from thousands of miles away.

All of this was going nowhere as late as last November when we last visited and saw Dad getting worse. Lately he’s been turning his electricity off and it’s been clear it’s not safe for him to live alone.

In the past couple of months, amazing things have happened. Even in the past week. Finally.

Here’s a picture of Dad, with my brother Kevin, in his new bedroom in his new home. He’s fitting in well and loves the care. All the things we’ve worried about over the past years have now been looked after. As someone said, now when we come over, it won’t be to deal with crises so much as it is to visit our Dad.

Such a huge burden lifted.