Just over a year ago, my brother bought a poppy for my father. “It’s Remembrance Day,” said my brother. “So?” “Well, thanks for fighting in the war, Dad.” “It was the life of old Riley!” he said, thinking of his Air Force service in South Africa. “No rations, girls throwing themselves at you. Better than life in dreary old England.” “Well, thanks anyways, Dad.” One day later I snapped one of my favorite pictures of Dad. 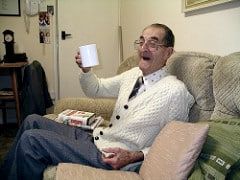 I thought of him on Remembrance Day. Wish we could give him a poppy and hear about the girls throwing themselves at him. I think I kind of miss the man.