I should have known something was up the other night when Charlene greeted me with a smile at the door. Turns out she was trying to break the news to me gently. At first I thought she had finally realized how lucky she is to have me. Nothing in life is as good as it seems. After the destruction caused by our dog on Wednesday, I seriously considered taking him back to the animal shelter. We have a two-week trial period and can get our money back until tomorrow. He’s taken some paint off the laundry room wall, broken my toolbox, chewed my Coke pillow, destroyed a computer monitor, keyboard, mouse, and some wires, as well as a carpet and a large crate. One thing I’ve learned since Wednesday is that my story is tame. I’ve heard of labs breaking through drywall, doors, trashing entire houses. Great dogs, but “destructive when left to their own devices” is what I’ve read. I had a lot of support for taking him back. The only problem was, none of my supporters belonged to my family. We all know who wields the power in my family (hint: not me). It’s important to know one’s place. I may be the guy who walks the dog morning and night, buys the dog food, and fixes all the damage, but I’m not the guy who makes the decisions. I could have insisted that he go back, but instead I decided to leverage return policy and declare martial law:

Someone gave us some Canadian Tire gift cards a couple of months ago that have been sitting around. They were just enough to get something called a 30-minute Kennel that took me about 90 minutes to put up. The good news is that Buddy stayed in there today and didn’t destroy anything or even bark (zap!). Yes I’m cruel but remember, it’s martial law. The only problem is that the kids didn’t look too bad in the kennel either…makes me think… (just kidding, kids!) 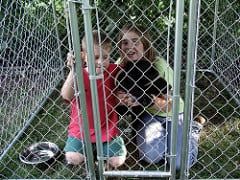