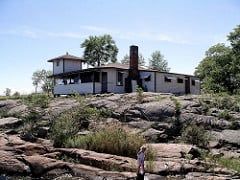 Friends of ours were kind enough to invite us up to their cottage Thursday night to Saturday afternoon. We caught frogs, fished, tubed, ate, walked northern lights, and generally had a great time. The cottage dates back to the 1860s, before Canada was a nation, and was formally the eating hall for a logging company. The towers (one visible above) are now bedrooms, but were used as lookouts in the logging days. Cool to be staying in a cottage with such a history. I think I could get used to having my own little island on Georgian Bay somewhere, my part of the Canadian Shield. What an awesome place. Thanks, Mossmans!