Part of my year two project at Gordon-Conwell is preaching a first-person narrative sermon. Today was the day. I had fun preparing. The passage was Luke 5, where Jesus helps Peter catch fish at the wrong time and place and calls him as his disciple. I had to think through a lot of issues to try to get into Peter’s head. What was he thinking? How many previous encounters did he have with Jesus? What did he tell his wife when he quit the fishing business and left a boatload of fish on the shore? I suspect Peter might have been pretty skeptical of Jesus at first. Hard to picture a life-changing moment taking place on a little boat about to sink, surrounded by scads of fish. Kind of fun to try to put a bit of flesh on the story. When it was time this morning, I felt like chickening out, but I had already committed. I had a bit of fun. Peter reported that he was being courted by a major Christian publisher to write a best-selling book on why he was so successful. Here’s the cover: 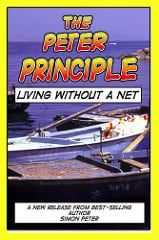 Peter was pushing for Third Peter, but the publisher didn’t like it. Yes, even Peter has to sell out these days to get a book published. I forgot some of my better lines (Peter was thinking of writing The Peter Driven Life and Blue Like Peter’s Language) but it turned out okay I guess. But I was glad to get back into my own clothes – even though preaching in sandals wasn’t half bad. The sermon is here. Thankfully there was no video.