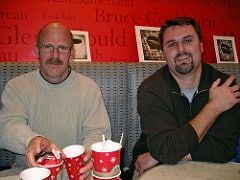 It finally happened. Some of the readers of this blog got together last night at Yorkdale for a coffee and a chat. Brian, Jacob, George, Chris (George’s friend) and I met for a couple of hours. Above, you’ve got George on the left, and Jacob to the right. These are genuinely good guys. I enjoyed talking to them and getting to know them better. Blogging is good for a lot of things, but you never really get to know a person until you meet them face to face. George is famous for his comments, here and elsewhere. What is George like in person? He’s passionate (as you would expect) but much more warm than is communicated in some of his comments. It was cool to hear some of the things that he’s involved with. His comments don’t do him justice. I’ve always suspected that although we disagree from time to time, I would like him. I turned out to be right. I suspect that it will be easier to understand where he’s coming from now that I can put a face and a personality to his name. Thanks, guys, for a great time getting to know you. Later in the night, we had Jordon over. A good night spent with some good people. Later today, I’m off to the Resonate lunch in Oakville. More to come.